The Ogden City Council adopted the $165 million FY2018 Budget, following the August 8th Truth in Taxation Hearing. An overview of the approved budget, along with goals and guidelines, is available here.

As part of this year’s budget, the Council approved a proposal to maintain the FY2017 property tax rate instead of adopting the lower certified tax rate. This produced 7.2% more revenue, enabling the City to begin to adjust for the impacts of three decades of inflation.

Other highlights of the FY2018 budget include step increases for public safety employees, merit increases for general employee salaries, and additional salary adjustments for those employed with the City during years that salary increases were foregone.

The public had several opportunities to provide input on this year’s budget, including three public hearings and two Virtual Town Halls. 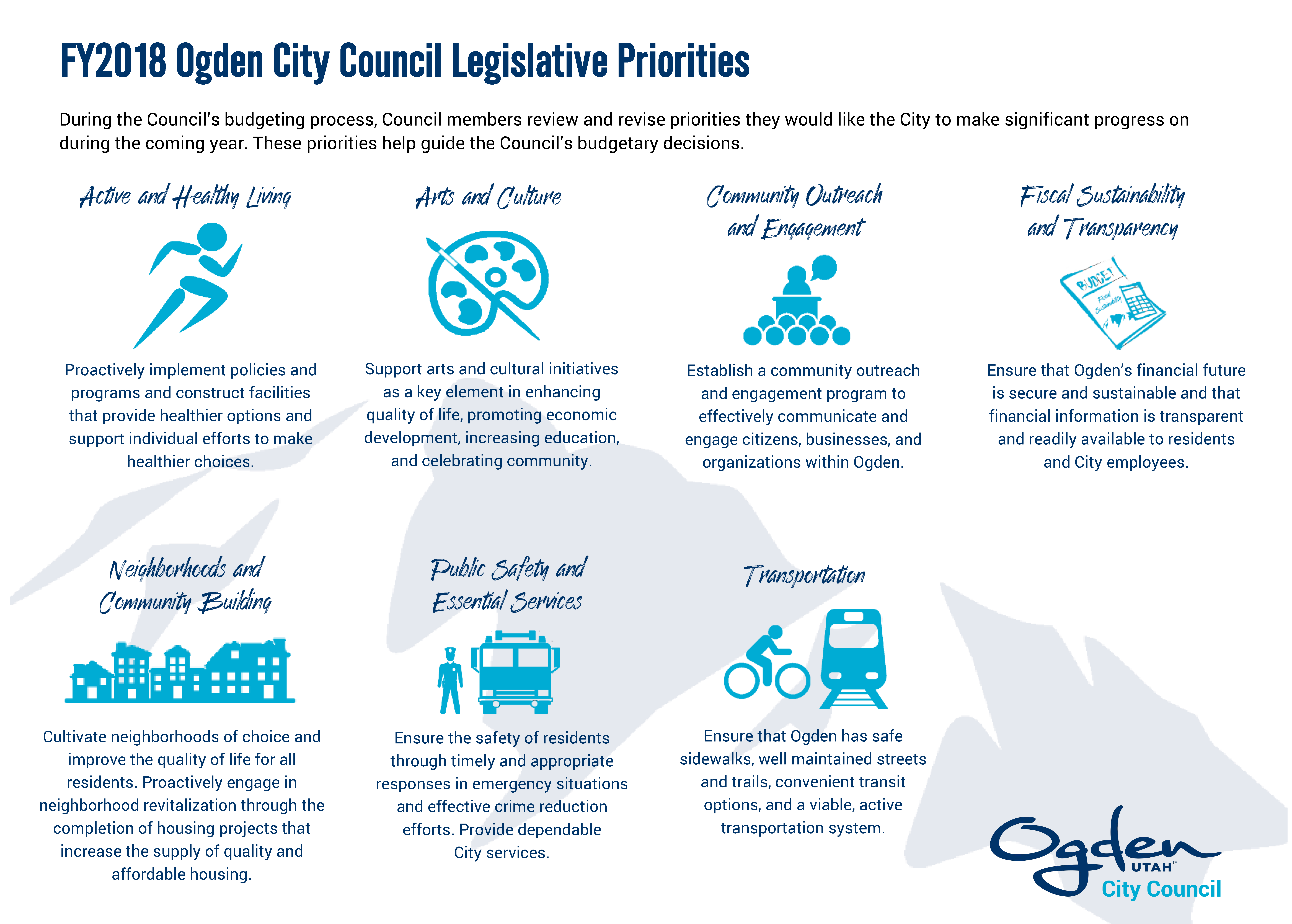 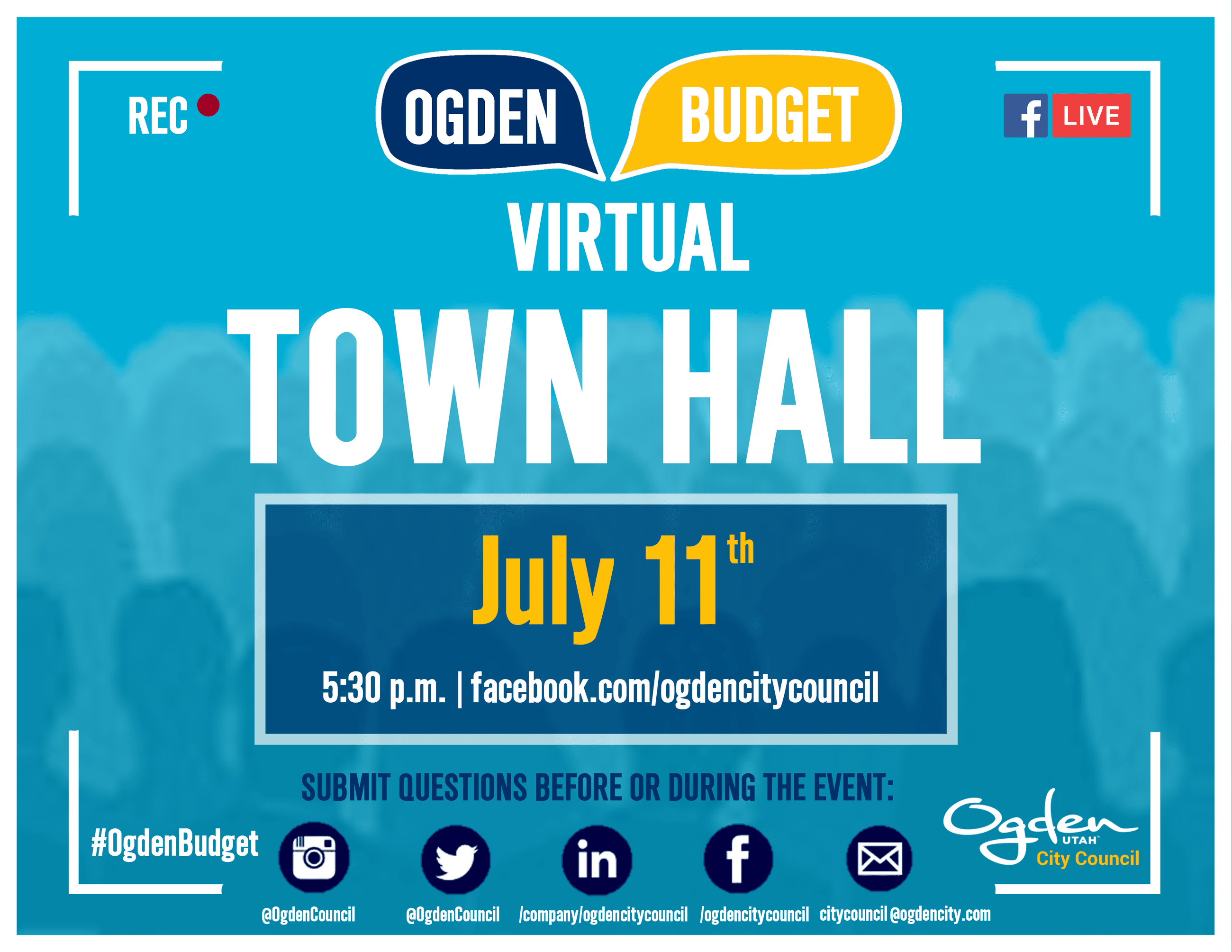 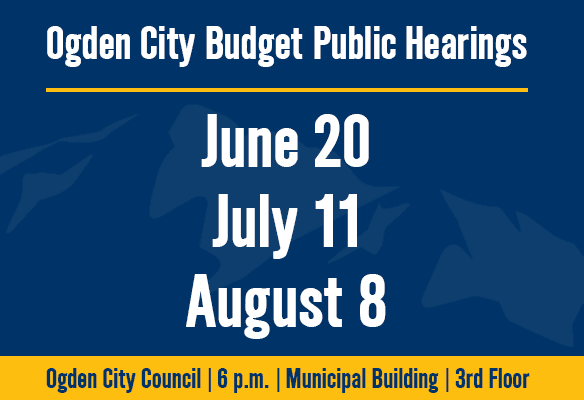 Among the key elements of the FY2018 budget, the Council approved a proposal to maintain FY2017's property tax rate, instead of accepting the  lower certified tax rate. Because of Utah's tax structure, Ogden has failed to keep up with inflation for the past three decades.

Property tax is designed for revenue neutrality, meaning the revenue a city receives stays the same every single year. If a city generated $10 million in property tax revenue last year, the State Tax Commission would use their models to adjust the Certified Tax Rate to generate $10 million for this year. As property values increase, the property tax rate proportionally decreases, and cities fail to capture inflation.

Maintaining the existing tax rate of 0.003103 for FY2018 generates an additional $808,389 in tax revenue, or 7.2% more revenue than the Certified Tax Rate of 0.002895. This enables the City to fund otherwise unfunded essential services, including public safety and facilities. 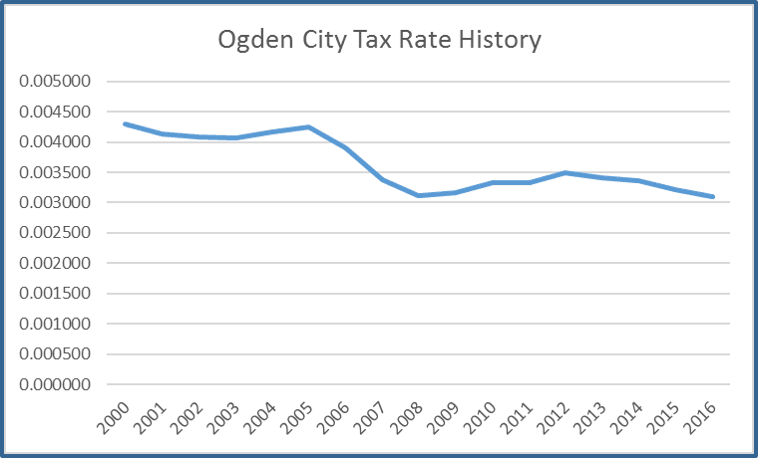 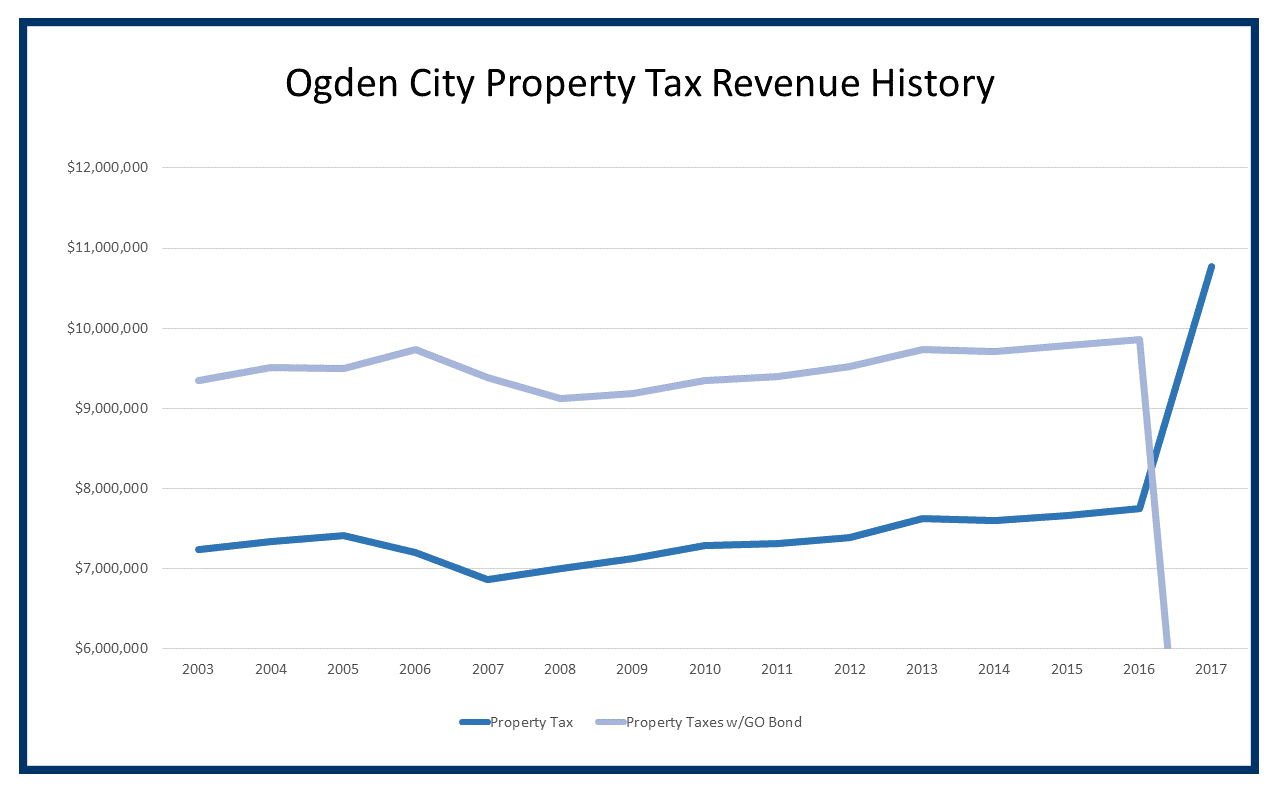 Calculate the Impact on your Tax Bill

The property taxes you pay each year are distributed among eight taxing entities.

You can calculate the impact of the Council's decision to maintain FY2017's property tax rate on your tax bill using the interactive calculator below or by downloading the Estimated 2017 Tax Bill Worksheet and the Interactive Property Tax Bill Calculator.

Please keep in mind that these calculations do not account for any increases that the other taxing entities may instate. 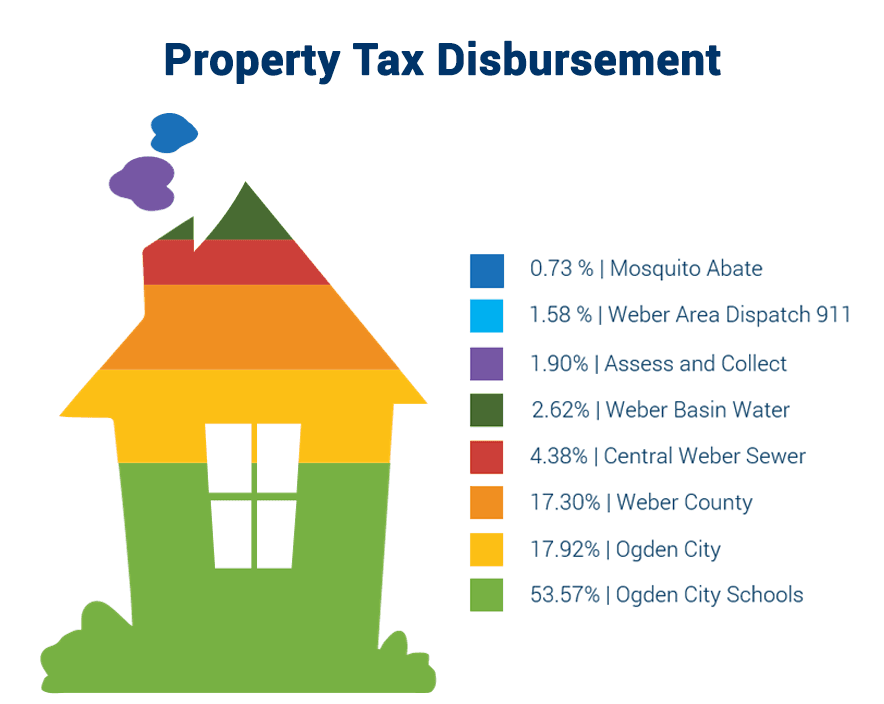 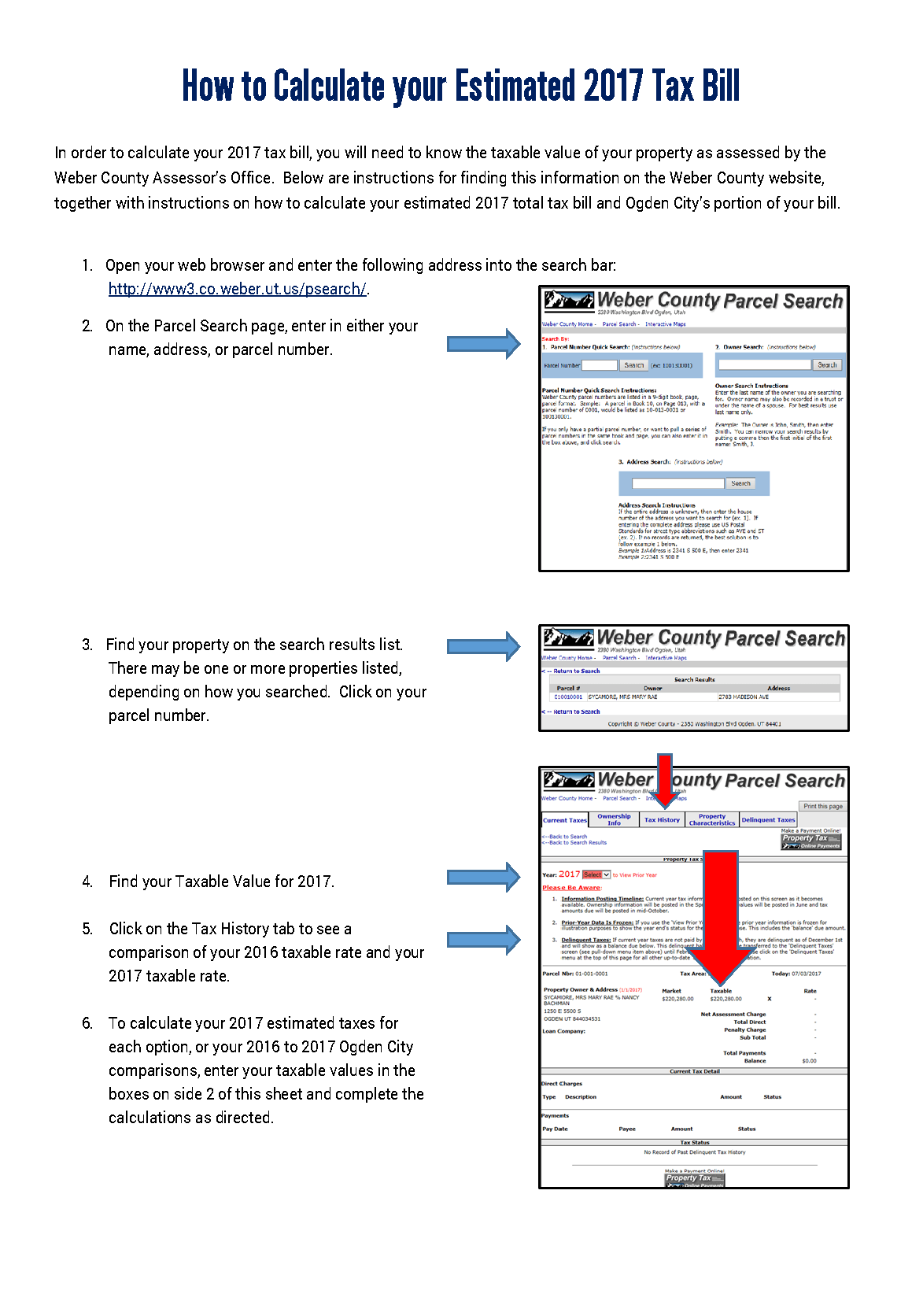 Despite an increase in Ogden’s population during the past 20 years, Ogden City Administration has worked to maintain a high level of service while decreasing the number of City employees per resident. Ogden Fire Department is successfully operating with 14 fewer fire personnel than in 1998, and Ogden Police Department is well below the national average of two police officers per 1,000 residents, with just 1.7 sworn personnel per 1,000 people living in Ogden.  That does not take into account the increased need for public safety measures that coincides with the growing number of people visiting Ogden, as it is becoming a more popular destination city.

Along with finding ways to operate with fewer employees, Department Managers have implemented numerous other cost-saving measures.  Ogden Public Services  saves about $286,000 each year by providing in-house engineering services, has significantly cut the cost of concrete replacement by utilizing methods such as saw cutting, and has lowered water production costs with the new water treatment plant and remote meter reading.

Ogden City employees are hard at work building other revenue sources to take some of the burden off of taxpayers. Ogden has placed an increased focus on grant-seeking efforts. Ogden Business Development has brought retail into Ogden, such as Walmart, WinCo, PetSmart, Ross, and Wayfair. Business Depot Ogden has experienced 1 million square feet of new construction.  City employees are seeking out innovative solutions to make the airport profitable, including increasing airport parking revenues and incentivizing additional commercial air service.

Despite these efforts, Ogden is decades behind where it needs to be in order to adequately fund its essential services. For FY2018 alone, there is a $400,000 shortfall in facilities costs; the City is nearly $300,000 short in funding a fully-staffed police force, and thousands short in funding trails, parks, fire, and planning.

These costs can be covered by maintaining the existing tax rate for FY2018.

The Mayor presented his proposed FY2017-2018 Proposed Budget. The Council accepted the Mayor’s Proposed Budget for review. The Mayor’s budget included a proposed tax increase to ensure the City realizes the $350,000 estimated to come from two retiring Redevelopment Areas.

The Council met with the City financial advisors to review the General Fund Comprehensive Financial Sustainability model. This was the second work session to review the five-year rolling model used to help forecast the health of the City’s General Fund. The initial discussion focused on general principles such as tax rates, the effects of central assessments on property tax revenues, and historical trends for the City’s revenue sources. The City’s financial advisors reviewed assumptions upon which the model was developed and discussed the outlook for the City’s General Plan over the next five years. The Council also held a work session to review and discuss the proposed FY2017-2018 Budget.

The Council held a work session to review and discuss the proposed FY2017-18 Budget. The Council determined they would like to move forward with a Truth in Taxation hearing in August.