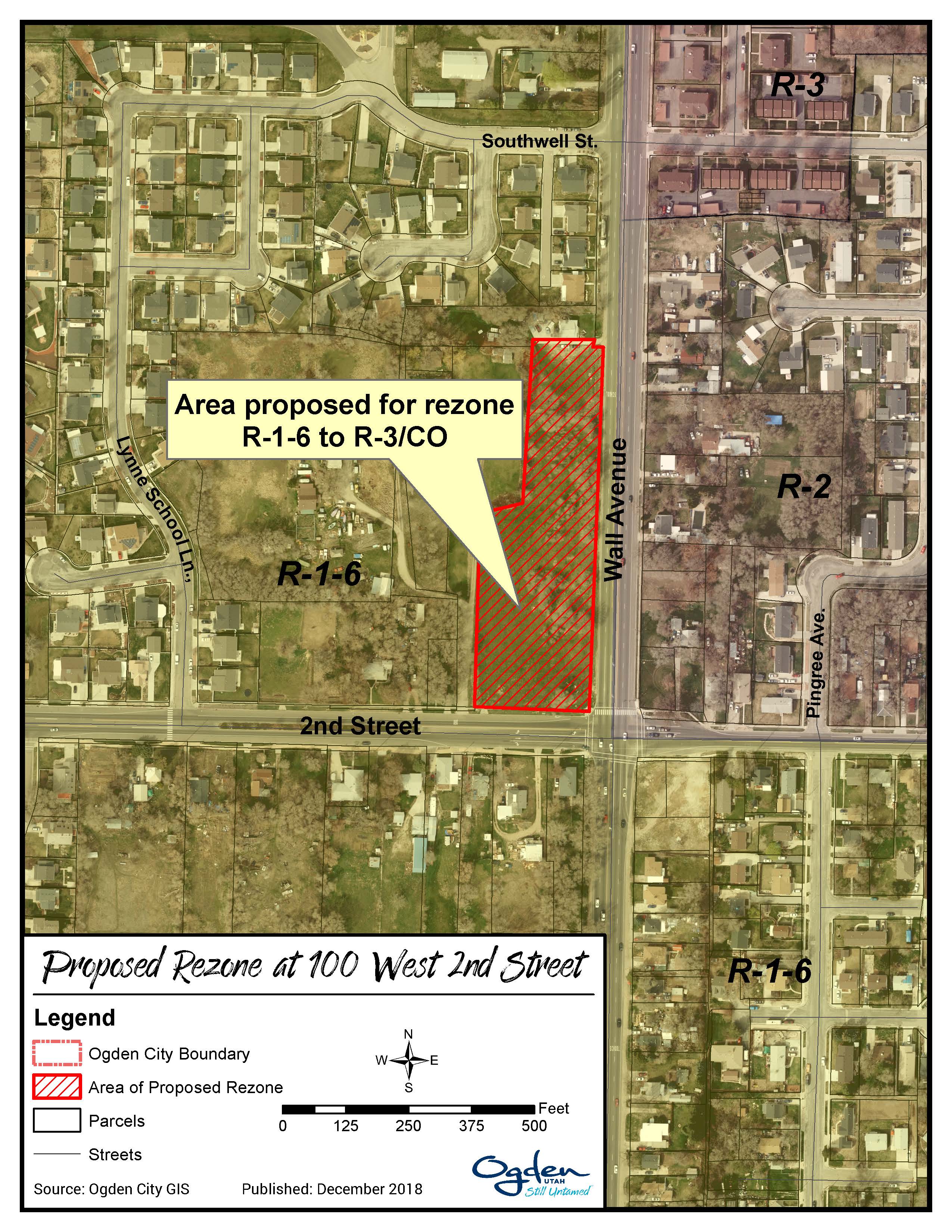 n to rezone just over three acres of property at approximately 100 West 2nd Street.  Based on the requirements of the Lynn Community Plan, the rezone was accompanied by a development agreement that provided details for the potential development.  Throughout 2016 and 2017, Mr. Hernandez-Orozco worked with the City’s Planning Division to develop a plan that would meet the design standards set forth in the community plan as well as the City’s development ordinances.  In July of 2018, the proposed rezone and development agreement was presented to the Planning Commission for consideration.  The Planning Commission reviewed the petition and forwarded a recommendation of approval to the City Council.  On January 8, 2019, the City Council reviewed the proposed rezone and development agreement and accepted public input but did not take final action.  The Council, based on concerns raised by residents, tabled the item to allow Mr. Hernandez-Orozco to work with the City to resolve issues raised at the January 8th meeting.  Mr. Hernandez-Orozco has been working with the City to address the issues and has submitted an updated plan for the Council’s consideration.  The Council will consider the updated proposal at its February 26, 2019 meeting.

Mr. Hernandez-Orozco’s proposal includes a 30-unit townhome-style development, with a single internal, private street, common green space, and a play area.  The proposed units are single-story in their design with limited second story living space incorporated into the roofline.

The Lynn Community Plan, first adopted in 1986, covers the area between Washington Boulevard and BDO and between 12th Street and the Ogden/Harrisville boundary.  The plan was updated in 2005 with specific recommendations for the land around the 2nd Street and Wall Avenue intersection.  The plan requires that a Conditional Overlay with a development agreement be approved with any rezone.  The plan recommends the land on the northwest corner of the intersection, Mr. Hernandez-Orozco’s property, be zoned R-3 (Residential Multi-family), PI (Professional/Institutional), or C-1 (Neighborhood Commercial) with an explicit restriction on convenience stores and service stations.  Further, the plan indicates that any proposal must be compatible with the character of the area and that buildings be single-story, have pitched roofs, and brick as the primary exterior material.

Mr. Hernandez-Orozco submits a petition to rezone 3.13 acres of property located at approximately 100 West 2nd Street from R-1-6 to R-3/CO (Conditional Overlay).  The petition is accompanied by a preliminary concept plan and architectural elevations.

Mr. Hernandez-Orozco works with City Planning staff to further develop and refine the preliminary concept plan and building elevations to ensure compliance with minimum standards prescribed in the Lynn Community Plan and the City’s zoning and subdivision codes.

The Planning Commission holds a public hearing on the proposed rezone.  At that meeting, several residents expressed concerns about the proposal.  These concerns expressed are summarized as follows:

The City Council office received the recommendation and began reviewing the proposal.

The Council reviewed the proposal during a work session meeting.  Council members expressed some concern about the density, layout, and potential landscaping, but did not direct any changes to be made to the proposal.

After accepting public input and discussing the proposal, the Council voted to extend the consideration of the item to allow Mr. Hernandez-Orozco to work with the City to address the concerns expressed.  Based on the Council’s Rules and Norms, extending an item does not require the identification of a specific date at which the item would be further considered; rather, the item is to be brought back to the Council when the Council and City Staff feel that issues have been addressed.  As part of an extension, public notice is to be provided to inform residents of the date and time of the reconsideration.

The Council reviewed an updated proposal from Mr. Hernandez-Orozco.  The changes dealt with the garbage collection, parking, and incorporation of historical elements.  In addition, the traffic study commissioned by Mr. Hernandez-Orozco was reviewed.

At the February 5th work session, the Council determined that the issues had been addressed adequately enough that the petition could be reconsidered.

Mr. Hernandez-Orozco addressed the garbage collection issue by proposing several dumpsters residents can use within the project.  In addition, when Wall Avenue is improved as required by the development, the edge of the roadway will be set back to line up with the curb location of the properties to the north of the project site.  This will allow additional shoulder area for garbage collection if residents choose to have the City collect in that location.

With regard to parking, Mr. Hernandez-Orozco had updated the concept plan to include full-length two-car driveways for each unit.  This will allow each resident to have a two-car garage as well as two parking spaces in the driveway.

Mr. Hernandez-Orozco has also indicated a willingness to incorporate historical markers in the common space recognizing the history of the area.

The traffic study performed for the project shows that the increase in vehicle trips generated from this project will not substantially impact the current traffic patterns.  In addition, the traffic study recommends restrictions on the turns out of the proposed project on both Wall Avenue and 2nd Street limiting the movements to right turns only.

The Council will consider the updated concept plan and development agreement accompanying the proposed rezone.  Public notices have been issued and public input will be accepted prior to the Council’s final consideration.  At the meeting, the Council may approve, deny, amend, or further extend the consideration of the proposal.

If the Council approves the proposal, either as presented or with amendments, the development will still need to undergo all of the necessary site plan review processes.  This will include a detailed review of the site plan, building and landscaping materials, drainage and engineering analysis, emergency vehicle access and circulation, and other similar reviews.  In addition, a conditional use permit will need to be approved by the Planning Commission, which will require a public hearing.  Public notices for that hearing will be sent to surrounding residents to ensure public input can be taken into consideration.

Mr. Hernandez-Orozco will be holding two meetings for the neighborhood. The meetings will be held at the development site at 100 West 2nd Street.

Mr. Hernandez-Orozco has sent invitations to the surrounding neighbors. Click here to view the invitation.