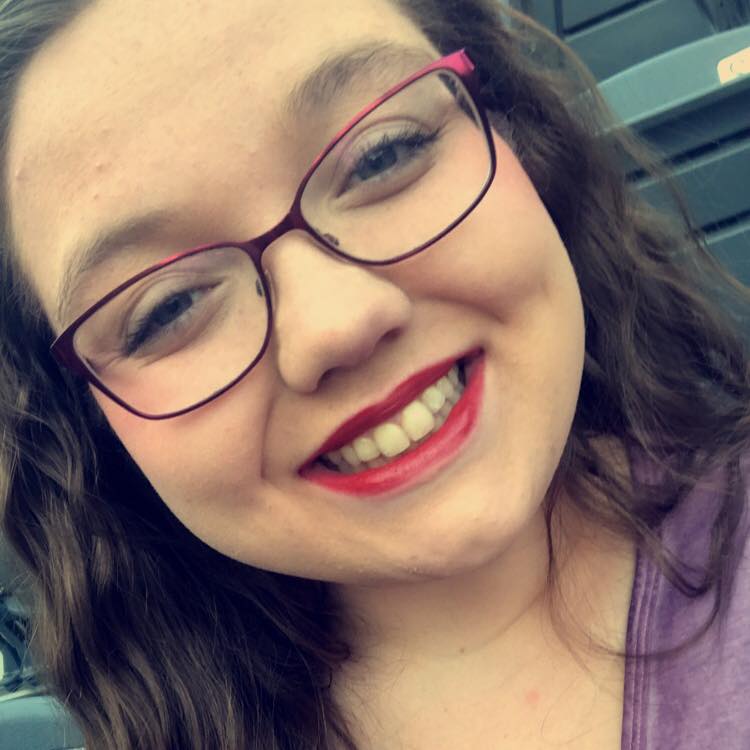 Hi, my name is Dawn Smith and I am an intern at the Museums at Union Station. I have been looking at the Myers/Schrieder family collection and I’ve found some cool stuff I want to tell you about. The Myers family kept and then donated nearly 100 Valentine’s Day cards that were exchanged during the 1920s and 1930s in Ogden. We do not know everything about this family, but we were able to figure out that the cards were sent between family members and people who were probably classmates. While I was looking through the cards some of them reminded me of cards you might send out today, even if they looked a little different, and I started thinking about how we can learn about relationships from this collection.

By the end of January, we start to see stores filled with all sorts of red hearts, flowers, chocolates, and cards filled with love, but like all holidays Valentine’s Day had to start somewhere. The common story of Valentine's Day is that it comes from some Roman traditions that were modified to honor a Christian saint, but I knew that couldn’t be where the story ends or we would not be giving out chocolates and cards today. So, I decided to do some research and I found out that it wasn’t until 1849 that Esther Howland created the first modern valentine in America. These cards were initially very elaborate with fancy paper, lace trim, and hand painting. The card industry continued to grow as printing in color became easier and cheaper. 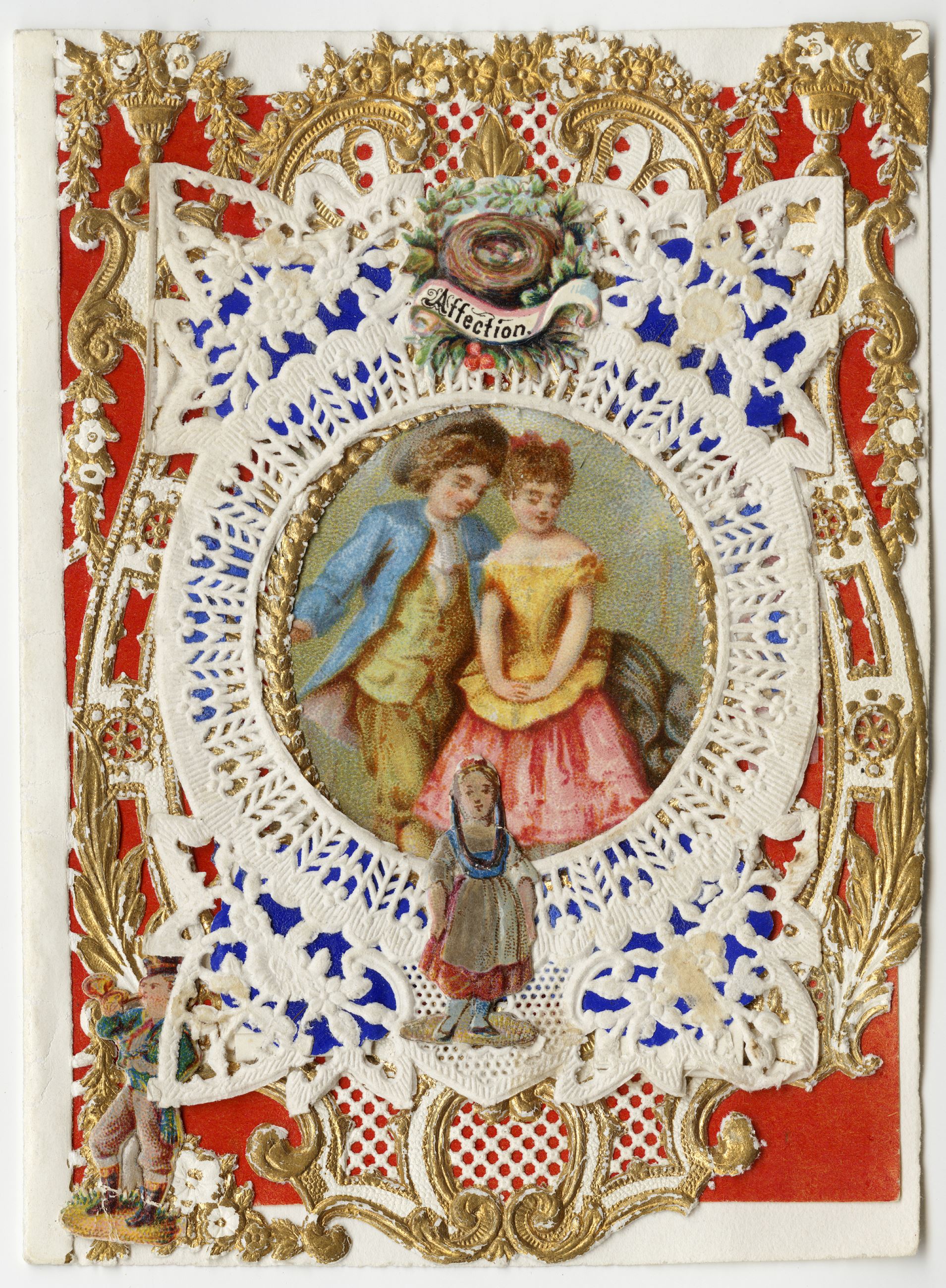 Cloth and lace Valentine card made by Esther Howland titled Affection, ca. 1870s. Typescript inside card: 'You say my heart, my too fond heart, Is cold, my dear, to you; Ah! canst thou such a thought impart To one who loves so true?' Esther Howland - Mount Holyoke College Archives and Special Collections, South Hadley, MA

By the 20th century, there were so many kinds of cards. We can see that really clearly in the Myer/Schrieder collection; they have cards from aunts, cousins, and classmates that range from fancy honeycomb paper cards to small handmade cards. Most of these cards are filled with love and affection and show that these friends and family members cared about each other just like the cards we give out today. We can even guess that Ralph Myers must have been quite popular because he got cards from many different girls confessing their love, but these weren’t even the most exciting things we found.

In addition to these nice cards, we also found what is often called a vinegar valentine. These mocking or comic cards got their name from how different they are from the typically very sweet cards that we send now. Vinegar valentines were popular in America until the 1940s and were cheaply made cards that typically included an image with short poems that ranged anywhere from a slight jab to truly insulting. There were vinegar valentines for any occasion when you might want to be rude to someone. You can find pictures of ones to reject people, cards for people with annoying habits, or even one for those rude salespeople. Finding these rude cards in collections is less common than the traditional cards which researchers think is because people were embarrassed and threw them away. We are lucky enough to have one that was sent by Bobby to Aunt Maytha with a note reading, “This is just for fun.” Clearly, Bobby sent his for fun, so we know they must have had a relationship where he knew she would not be offended by the mocking card. Vinegar valentines may have gone out of style, but we can still think of a few people we might send them to even just as a joke.
The Myers family clearly sent a lot of Valentine’s Day cards to show they cared about each other even if it was not in the romantic way that we often associate with Valentine’s Day today. It was a day to show that you cared about people and for the Myers family that involved a lot of cards, but it might not be that way for everyone. How do you show people you care? 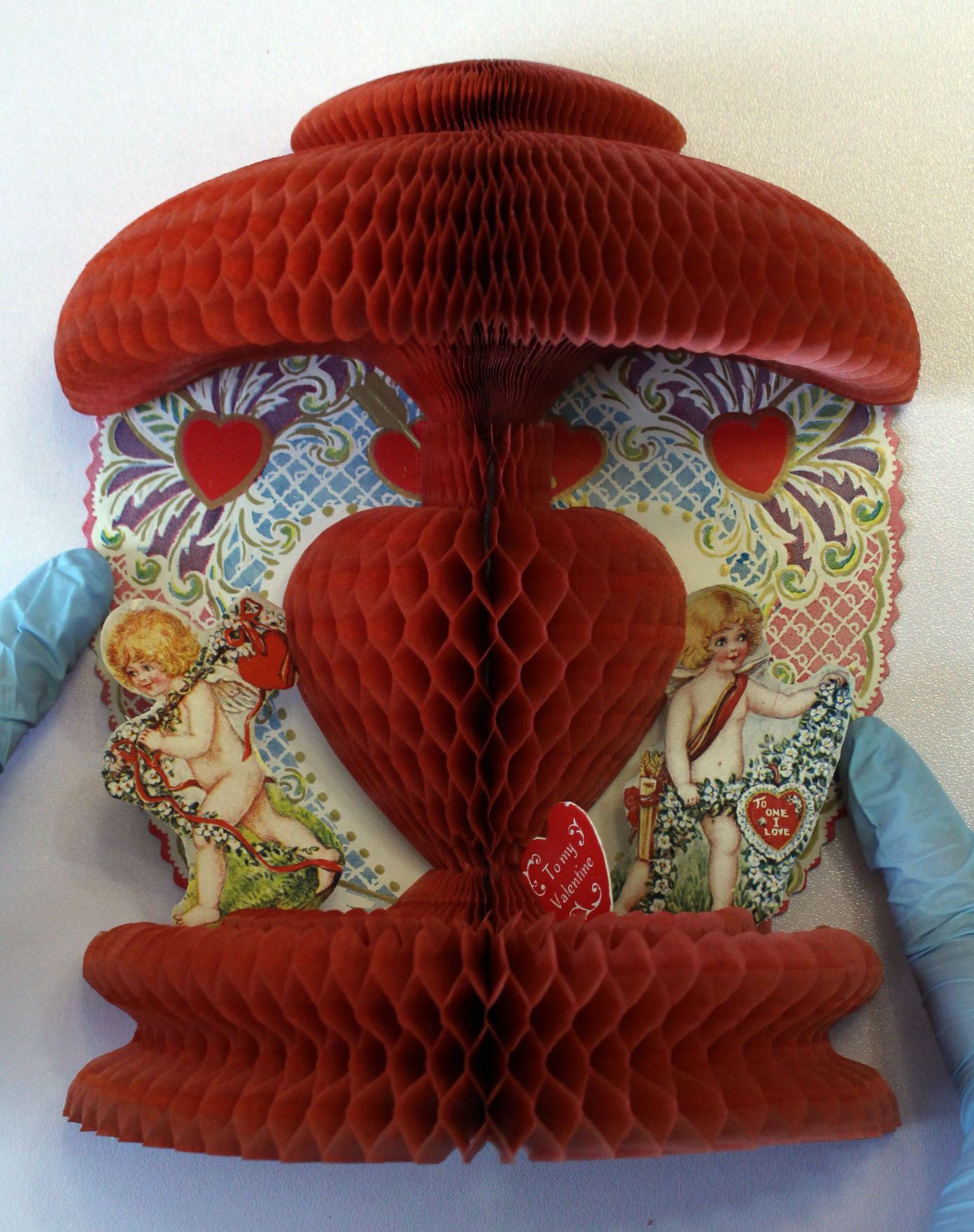